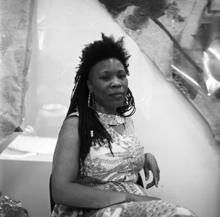 “A child born to a black mother in a state like Mississippi…has exactly the same rights as a white baby born to the wealthiest person in the United States. It’s not true, but I challenge anyone to say it is not a goal worth working for.” — Justice Thurgood Marshall

Tomashi Jackson’s work is research driven and anchored in the disciplines of painting, printmaking, drawing, and sculpture. Jackson investigates the languages of color theory alongside the attempts to legislate people by color. In Jackson’s work the realms of law, segregation, education, housing, justice, police brutality and voting rights are visualized primarily through abstraction, imagining the viewer as the implicated figure. Jackson uses the formal properties of color perception as an aesthetic strategy to investigate the value of human life in public space. Her investigation into color perception as an aesthetic strategy began with a close reading of Josef Albers’ pedagogical text, Interaction of Color. In this text, Jackson observed that the language used to describe the formal interaction of colors mirrored the language of racial segregation found in sources such as United States public policy documents, court proceedings, and other documents that shape the use of public space. Jackson’s investigation of the shared language around color, whether in reference to histories of inhumane policies or visual formalism, offers a narrative framework from which she constructs her own language of abstraction. Taking a historically focused approach, Jackson creates semi-abstract statements in her videos, paintings, collages and photographs that use color interaction to collapse historic and contemporary narratives of public and private space. For instance, in this year’s Whitney Biennial she compared the destruction of Seneca Village, New York City’s first enclave of African-American landowners, for the formation of Central Park to the Third Party Transfer policies that the current de Blasio administration is using to evict landowners of color. She explores materiality, light, value and metaphor, all under the umbrella of painting.

During her lecture at the Yale Norfolk School of Art, entitled “Color Problems,” she will share a selection of projects that illustrate both failed and successful attempts at solving color problems through her work. Exercises that explore limited value, simultaneous contrast, translucency and opacity have been investigated by students of visual art and color theory influenced by the work of Yale School of Art students published in Interaction of Color in 1963. Color is a thorny subject and naturally produces many failures among successes. The works discussed during her visit with the Yale Norfolk community will highlight her compositions as color problems that she considers successful because their unanticipated challenges were ultimately answered with intuition.

Tomashi Jackson was born in 1980 in Houston, Texas and raised in Los Angeles, CA. She earned her BFA from the Cooper Union School of Art in 2010. She earned her Master of Science in Art, Culture, and Technology from the MIT School of Architecture and Planning, and her Master of Fine Art in Painting and Printmaking from the Yale University School of Art. Tomashi has lectured as a visiting artist at NYU and School of Visual Arts New York, she has taught at Massachusetts College of Art and Design, is current faculty in the Lesley University MFA Program, the Cooper Union for the Advancement of Science and Art, and the Rhode Island School of Design. Her work is in the permanent collection of the Los Angeles Museum of Contemporary Art and the Pizutti Collection, Ohio. She is represented by the Tilton Gallery in New York City. She lives and works in New York City and Cambridge, MA.